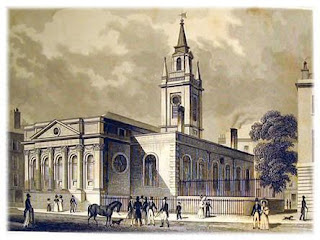 Standing proud on the south side of Guildhall Yard, the church of St Lawrence can owe its survival to its position as the Church of the Corporation of London. Originally, the Guildhall possessed its own Chapel but after this was turned into a court in 1782, the Corporation's services moved to St Lawrence. The area is full of the remains of former churches: Among many others, the site of St Michael Bassishaw is marked by a plaque on the other side of Guildhall, the remains of St Mary Aldermanbury and St Alphage are close and so are two towers, those of St Alban Wood Street and St Olave Jewry. The church of St Michaels Wood Street (at which was interred the head of James IV of Scotland) has vanished, but the yards of two Great Fire victims, St Olave Silver Street and St Peter Cheap, can be found within a short distance.

The great survivor in this crowded area, St Lawrence, was built in 1136 over a tiered section of the Roman Amphitheatre. It received its suffix, 'Jewry', from the fact that it was sited at the edge of the medieval City's Jewish area, and archaeological remains relating to their religious customs have been unearthed in the area quite recently. Although Edward I expelled the Jews, and other Kings persecuted them mercilessly, the suffix remained so that the church could be differentiated from other City churches sharing the same dedication. Stow described it as 'fair and large',and also remarked that it displayed a human 'shankbone' (an odd relic which he also claimed for St Mary Aldermanbury). This one was twentyfive inches long and was at one time accompanied by a tooth the size of a fist. Whether these proportions were correct cannot be proved, as both relics are long gone, but Stow claimed to have personally seen the bone. Of course, whether the bones were human or not seems a more pertinent question. Buried in this medieval church were members of the Rich family, ancestors of Lord Richard Rich the slippery Tudor courtier, and Sir Richard Gresham the father of Thomas. William Grocyn, a scholar praised by the humanist Erasmus, was Rector in 1496 and the parishioner Sir Thomas More preached here.

This church went up in flames in 1666, and Wren's rebuild opened 11 years later, costing a then impressive £11,870, the re-opening being graced by the presence of King Charles II. It was now a Guild Church rather than a Parish Church, the Corporation its patron. The King's Chaplain, John Tillotson, revered as one of the great preachers of his age, was a weekly lecturer at the new church before becoming Archbishop of Canterbury in his twilight years. Married in St Lawrence, he was placed in a vault here in 1694. A century later, it was a custom to print and circulate the church's Michaelmas Sermon to the City aldermen.

On December 29th, 1940, during the same air raid that gutted St Brides, a bomb struck the church and nothing survived save sections of the walls and the tower. History then repeated itself. St Lawrence was rebuilt by Cecil Brown, closely following Wren's design. The new spire is a replica of the old. Following the example of her predecessor, Queen Elizabeth attended the re-opening of the church in 1957.

A couple of curious features can be spotted if one circles the church before visiting. The churchyard is long paved over and forms part of the Guildhall Yard; a plaque on the wall of the church explains its now invisible limits. It is well known that the streets around the Guildhall seem to 'bulge' outward, a consequence of the medieval street system having to build around the remains of the amphitheatre, and I did a bit of research to see if the churchyard's shape also had any features that may have accomodated the tiers of Roman work below. According to Roque's 1740 map of the area, the yard was more or less rectangular but does seem to curve slightly to the west, although this could just as easily be due to the marked curve of the roadway in front of the church entrance.
Another feature is the weathervane on top of the spire. This is the vane from Wren's original church, and is in the unusual shape of a gridiron. One finds out why as soon as one enters the building.

Through the western entrance, the visitor stands in a long vestibule. To the right are the vestries, to the left a small chapel in which can be found the crests of Basing and Gresham families. Ahead, to the right of the entrance to the main church, is a display case carrying relics salvaged from the rubble of Wren's building. The most notable feature here, however, is a painting. This has been attributed to the North Italian School of the late 16th century, and has miraculously survived both the Great Fire and the Blitz. The painting shows the martyrdom of St Lawrence, who was roasted on a gridiron in Rome during the year 258. Here's what Foxe's 'Book of Martyrs' had to say about this:
'He was beaten with iron rods, set upon a wooden horse, and had his limbs dislocated. He endured these tortures with such fortitude and perseverance, that he was ordered to be fastened to a large gridiron, with a slow fire under it, that his death might be more tedious. But his astonishing constancy during these trials, and his serenity of countenance under such excruciating torments, gave the spectators so exalted an idea of the dignity and truth of the Christian religion, that many immediately became converts. Having lain for some time upon the gridiron, the martyr called out to the emperor [Valerian], who was present, in a kind of jocose latin couplet, which may be thus translated: 'This side is broil'd sufficient to be food, For all who wish it to be done and good.' On this the executioner turned him, and after having lain a considerable time longer, he still had strength and spirit enough to triumph over the tyrant, by telling him, with great serenity, that he was roasted enough, and only wanted serving up.'
Foxe was, of course, a Protestant propogandist and his texts should not be taken too seriously, but the painting - more or less contemporary with Foxe's work - certainly gives a vivid portrayal of this scene.

I entered the church and noticed two things immediately: the interior is very splendid, probably due to the Corporation's patronage, and some sort of event was under preparation. Several suited people were loitering, and a sound engineer was setting up a big fluffy microphone in one corner. I sneaked a glance at one of the booklets strewn in the pews. It seemed I was only half an hour from the commencement of a special service, held in the presence of the Lord Mayor, which is held just before the election of same. Furthermore the rather ornate pew at the front of the church, from which I had picked up the booklet, was that of the Mayor himself. I prudently replaced the booklet.

Other than a tablet commemorating Tillotson, and the fact that Cecil Brown's ashes are interred in a cinerarium below the altar, most of the church's monuments take the shape of stained glass windows, colourful yet not overdone in a way that darkens the church. Most of these are the work of a Master Glass Painter named Christopher Rahere Webb. He owes his unusual middle name to the fact that, at the time of his birth in 1866, his uncle Sir Aston Webb was restoring St Bartholomew The Great at Smithfield, the priory church founded by Rahere. Three windows commemorate the parishes of St Mary Magdalen Milk Street and St Michael Bassishaw, which were united with St Lawrence in, respectively, 1666 and 1892. Others commemorate Thomas More and Dr Grocyn. My favourite, however, is back in the vestibule, where a window shows Wren flanked by his mason Thomas Strong and his carver Grinling Gibbons, above Cecil Brown and the Vicar at the time of that restoration, Frank Trimlingham. They are surrounded by the craftsmen of the post-War rebuild and stand above an idealised skyline of Wren spires and towers.

The Commonwealth Chapel, on the north of the church, is divided by an oak screen which contains, in its centre, a wrought-iron screen built and donated by the Royal Marines. Flanking this are two further gates, donated by the Airborne Forces and the Parachute Regiment. The chapel contains an Ascension window and a Madonna and Child painting by Cecil Brown, also a St George window containing the arms of the Sovereign Independent States of the Commonwealth in 1957: South Africa, India, Pakistan, Ceylon, Ghana, Canada, Australia, New Zealand and Malaya.

The church was beginning to fill up with people who, frankly, looked a lot more dignified than I looked. I paused to admire the Font, a c1620 work originally from the disappeared Holy Trinity Minories, then surreptitiously made my exit. Stepping back through the western doors, I stood aside to allow a man wearing a great big chain around his neck to pass, accompanied by his coterie. Off I strolled, having no time to hobnob with Lord Mayors. Not when there were other churches on my list for the day...
Posted by Prince Vulpine at 09:13